A sword is both a weapon of attack,and a symbol of strength and power. Swords are designed to defend their owners against attacks, at the same time as conferring power and superiority on those who wield them. Swords symbolize strength, as well as the possibility of battle and aggression.

However, there is a lighter side to sword symbolism, and it can also represent entirely unexpected things. Read on to find out more!

What does a sword symbolize 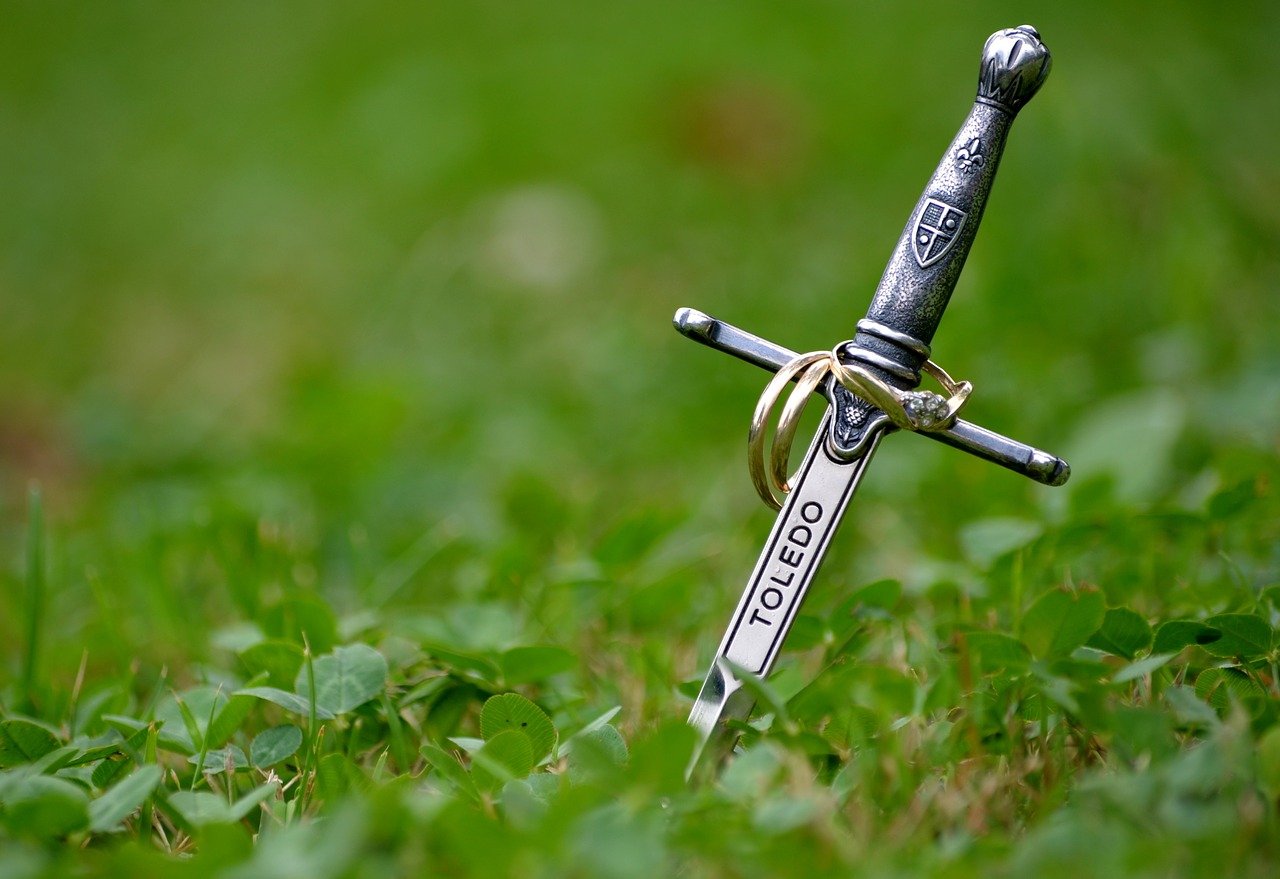 A sword is a multi layered symbol. It represents power, strength, courage and authority. Someone wielding a sword, especially if no one else has one, is automatically the most powerful and intimidating person in the group, and others might feel scared or intimidated.

A sword can also represent chivalry – think of the knights of old, gallantly defending their honor and their king (and their various ladies, of course!)

On a more cerebral level, the sword represents a quick intellect, with a strong power of intellect.  A sword can also show the gateway between physical and spiritual life, as it represents a gateway, through which the soul passes on its way to the afterlife (or whatever it is you believe happens to us after we die!)

Buddhism sees the sword as a symbol for slicing through ignorance, to find the courage and truth beneath any kinds of wrong thinking.

Japan views swords as a symbol of strength, courage, and the typical view of the mighty warrior.

Celtic symbolism views the sword more as a connection between families, and as a way of preserving lineages – swords were often passed down through generations, so they have great significance.

Interestingly, given the usual use for a sword, ancient Mayans saw it as a giver of life. It was seen as the gateway between physical life and the realms of the spirit, as it would transport someone, via physical death, into the afterlife.

What does a bound sword symbolize

A bound sword, like the one shown in a Tarot deck, can show a feeling of powerlessness; an inability to face up to the facts of what might be going on in life. A sword all bound up can show that it is not capable of carrying out its main purpose in life – to battle, defend and to “fight the good fight”.

Binding a sword can make the bearer of the sword seem powerless, but it can also denote benevolence, and an unwillingness to use the sword to cause damage.

A sword in a sheath is effectively bound, and made safe – but this is a different representation. It is often said that the real power of the sword is in the sheath itself, as this shows that you are aware of your power, and when to use it as well as when NOT to use it. A bound sword can represent protection of those weaker than oneself, and the lack of violence in favor of a more gentle approach.

What does a sword going through a skull symbolize

This is a common image; whether it be in tattoos, logos or other artwork. Its symbolism is fairly clear – it shows triumph, a defeating of enemies, and the subsequent power and glory. The skull itself symbolizes death, while the sword symbolizes power, so this image can also be a glorious image to show that the fears about death have been completely defeated.

A sword going through a skull can symbolize fearlessness and heroism. It can also showcase traits like honor and courage, and the admirable traits of chivalry and gallantry.

This image is often used in tattoos, punk artwork and various other “alternative” cultures.

What does a sword going through the neck symbolize

The neck symbolizes a communication between the higher self and the lower parts of the soul. It is primarily a junction; in the physical self it is the way that we both swallow food and water, and breathe, which means it is essential for life, while it represents the connection between the physical and spiritual self in a more metaphysical way.

A sword going through a neck is quite an alarming image, and one that can cause unease – after all, having a sword go through your neck is not something that any of us particularly want to experience! However, it doesn’t have to be all bad.

The sword, with its symbols of power and strength, going into a neck which symbolizes communication, can show that there is something that needs to be addressed in terms of dealing with any issues as soon as they arise.

What does a broken sword symbolize

A broken sword might make you think that it stands for the loss of all those heroic traits that a sword carries, but actually it can have several different meaning. Of course, it can represent the loss of power, authority and strength, and the fear of being without a weapon in ones hour of need.

A broken sword can also symbolize a sadness; a feeling of loss, and a fear that one has lost one’s power and standing in the world. Warriors in battle are often depicted with their swords broken, to show that they have been defeated and are now powerless. A broken sword can also show the severing of family bonds, or the loss of a new generation to pass an heirloom sword down to.

However, there are other legends attached to a broken sword. In the UK, in the collection of the Crown Jewels, is a broken sword. It is known as “The Sword Of Mercy”, and it is used at coronations, to show the need for a king or queen to have mercy and be a just ruler, and to not always use their sword in aggression.

The sword is a powerful symbol, there is no doubt about that. But it has many layers – as well as aggression, power and battle, the sword can also symbolize peace, protection, mercy and the bonds of family.