Monkey are cheeky, daring, and adorable creatures, aren’t they? (Unless you are driving through a safari park with several of them hanging off your wing mirrors!) Monkeys represent tenacious survival; humor and the closest thing in the natural world that we have to ourselves.

With this in mind, it is hardly surprising that many monkey symbols have evolved, and the fact that these little primates have been fascinating humanity for millennia.

What does a monkey symbolize 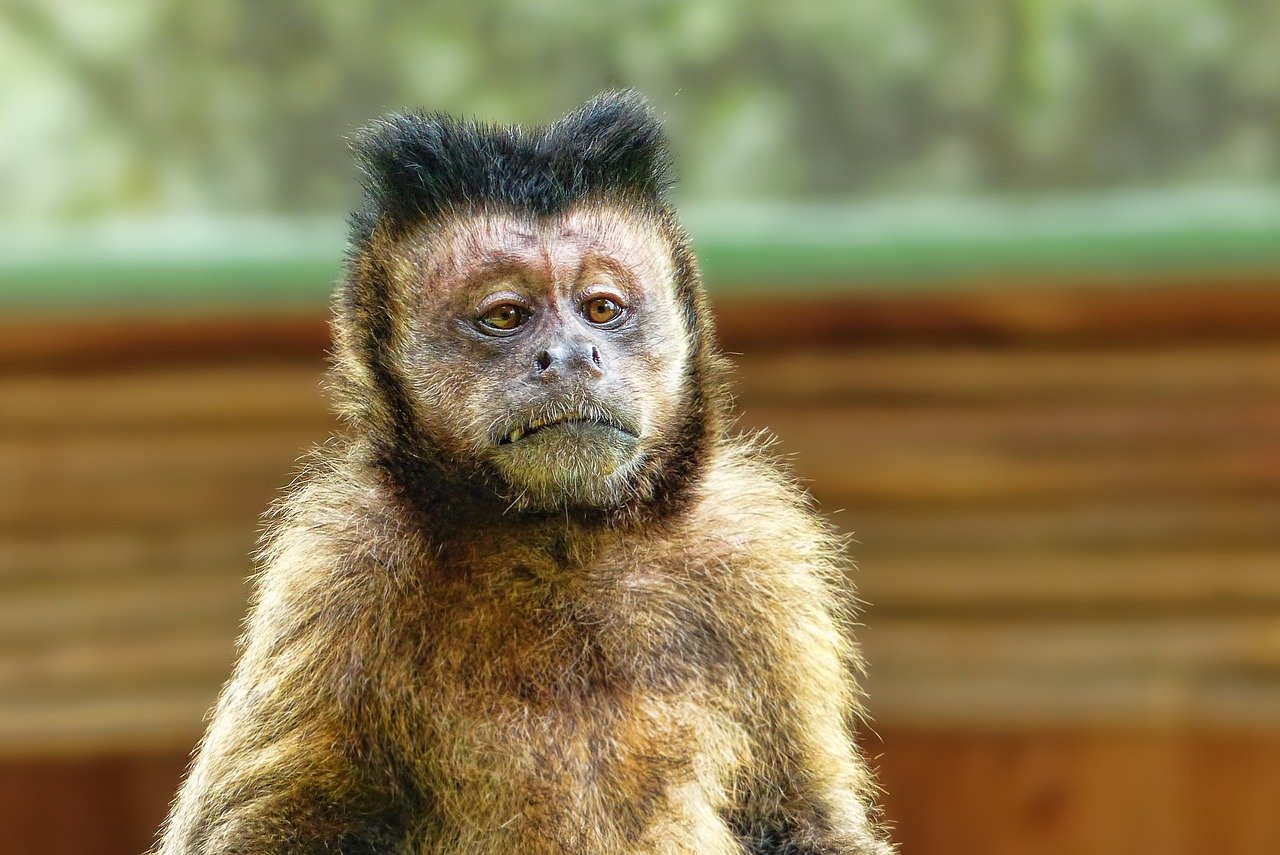 A monkey symbolizes all the things that we think of when we think of monkeys. Playfulness, a close family connection, energy, intelligence and many more positive traits.

They can, conversely, be seen as the embodiment of less desirable traits, such as aggressiveness, lust and greed. Interestingly, monkey symbolism has changed a lot over the centuries since people first started noting symbols; in the past they were generally considered to be more positive than in recent times.

The monkey, although it spends a lot of its time in the serious search for food, shelter, and protection from predators, is actually a light hearted creature, which often engages in play, grooming, and plenty of family time.

Monkeys are wild creatures (excepting those in zoos, or those that are sometimes kept as pets), so they can also show an untamed side, and this is also reflected in their symbolism. The wildness of creatures shows the wildness of nature, and the fact that there will always be parts of it that are inaccessible to humans, no matter how hard we try to domesticate it.

In the far East, the monkey is used to symbolize agility, and people with multiple talents. It symbolizes natural exuberance as well as a little cheeky playfulness! The monkey is also a symbol of a prosperous family and good, safe childcare, and it was believed that they could protect against supernatural spirits and even disease.

The monkey is a god in Hindu mythology; a reincarnation of Shiva, who devotes his time to pursuing justice and taking on evil, while in Buddhism a monkey was chosen out of all the animals, because of his courage and intelligence, to bring Buddhist texts from India to China.

The Mayans saw the monkey as a symbol of the arts, and the Aztecs also associated it with the arts, including dancing and music, as well as painting and literature.

What does a monkey symbolize in the Bible

Interestingly, the Bible looks on the monkey far less favorably than some other religions and belief systems. In Christianity, the monkey represents the more base instincts, like malice, greed and lust.

There is not all that much mention of monkeys in Christian teachings, mainly because they originate in areas where monkeys were not very common – but what there is definitely focuses on the negative traits of the animal. In some cases, monkeys have even been compared to the Devil, and their trickery can be used for evil rather than playfulness.

On the other hand, monkeys can be used as spiritual symbols in Christianity too. The well known “Hear No Evil, See No Evil, Speak No Evil” monkeys are part of a reminder to followers of the religion to keep an eye out for evil things in the world, and to protect themselves and others from various dangers that face both the body and the spirit.

What does a monkey symbolize in literature

In general, writings about monkeys feature their playful nature, natural curiosity, and their cheekiness. Monkeys in literature can also be shown as being very playful, and sometimes they embody the idea that they are tricksters, becoming mischievous and occasionally upsetting the apple cart!

Modern day kids’ films often feature monkeys (because, let’s face it, they are very cute!) and in these cases they are usually getting up to mischief. They are also portrayed as intelligent creatures, which can make their trickery even harder to discover.

Monkeys in literature can also be used a symbol showing good luck, vitality, playfulness and good health. Because of their strong family ties and great vitality, they can also be used as fertility symbols, or those representing baser instincts such as lust and lasciviousness.

What does a monkey symbolize in Mexican culture

Monkeys in Mexican culture have been largely made popular by a famous artist. Frida Kahlo, the celebrated Mexican painter, portrayed them as loving, kind protectors, but in general, Mexican culture perceives monkeys as personifying the baser sides of human nature.

They are associated with lust, greed and other traits that people consider to be beneath them, and things to be avoided. Kahlo changed the portrayal of  monkeys in Mexican culture however, and nowadays they are generally seen with a more kindly eye.

Monkeys are also seen as symbols of family, because they generally live together in large interrelated groups, and they can also be seen as a sign of fertility – in the time of the Aztecs, pre contact with invaders, monkeys were seen as fertility gods, who were also connected with dancing as well as the other arts – this is probably because of their playful, uninhibited natures.

What does a monkey symbolize in Japanese culture

In both Japanese and Chinese culture, the monkey is considered to be a powerful sign, and one that is often used as a totem for protection. It embodies quick wittiness, agility and quick physical movement too.

Monkeys’ significance in Japanese culture has changed over the centuries – in the 8th century they were seen as messengers between gods and humans, and brought luck and fertility to a marriage. They started to be seen as naughty tricksters in the 13th century, and by the 17th century they had begun to symbolize the negative traits in humans.

Monkeys are very close to humans in terms of physiology, and as such they have fascinated us for centuries. Their ingenuity, playful natures and close family bonds have all been translated into symbols by various different cultures over many centuries.